I recently purchased a Mosley TA-33 on Craigslist.  The final deal was $75 dollars and I had to take the antenna down.  I was allowed to test the antenna with my Rig Expert AA-30 antenna analyzer first, and it was cash before ladders.  The antenna tested ok despite the old, cracked coax.  It looked like 20 meters was not present but I had my configuration amiss.

Here is a photo essay of much of the project. 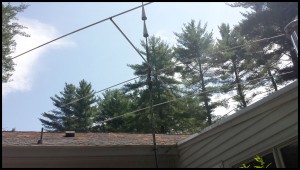 At previous location with cracked coax 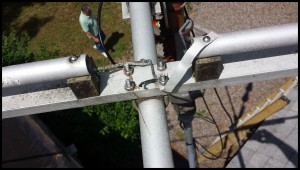 Reassembled in my driveway.  I opened all the traps, found only one cracked insulator but it was minor-  used J&B epoxy paste to reinforce the area though feel it was not necessary. Most has minor cobwebs- this antenna was outside for over 20 years.  Called Mosley tech support and got the coil counts to confirm it was originally assembled correctly.   It was. 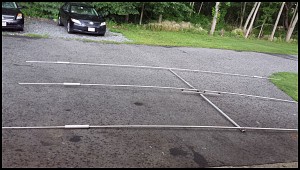 In order to set this up on it’s push up mast I used my Kubota to hold the mast horizontal while I bolted the antenna on.  I used a loose rope wrap at the bucket center hook to allow it to swivel from horizontal to vertical.  The yellow rope on the left side hold the antenna level as most of the weight is on the right. 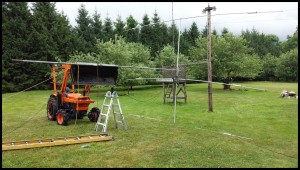 Close up of the loose loop 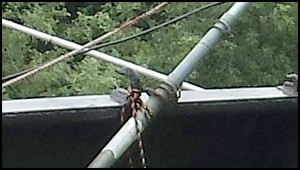 Here the bucket is lifted and antenna is brought to vertical. 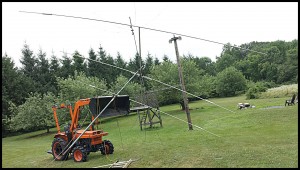 Here is the first installation-  Antenna is about 10 feet off the ground.  Even at this low height it was difficult to man handle. 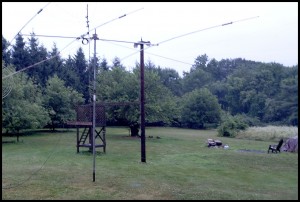 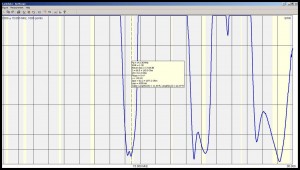 Now that I know the antenna works, it’s time to move it and put some power to it!
http://youtu.be/LEqkkeW-UFc

At the new location I’ve set the push up mast to 20′.  I have not used the smallest mast section as I did not trust it for the wind load.

The SWR improved with the additional ten feet of height.  I made many DX contacts but knew the antenna was too low to the ground for best performance.  After some thought I came up with a plan to jack the base up another 10 feet with some heavy angle iron.  The mast could have been extended…but not only did I not trust the top section-it would have been quite a bit of work to un-guy the antenna and extend the pole.

Here is the rough assembled mast support.  I used a cutting torch to make slots for the muffler clamps that will hold the mast.  The sections are bolted together with (4) 1/4-20 bolts, grade 5.  It might seem light but each bolt is rated for 2,700 lbs.  This is one of the reasons 1/4-20 bolts are one of my favorite fasteners.  I always get at least grade 5 except when using these as shear pins or some odd light duty project. 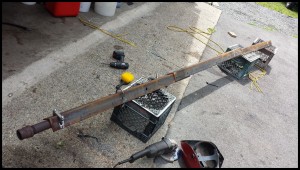 Unlike my Hex Beam, this antenna is pretty heavy.  Far too heavy to just man handle alone…but I guess if I had to I’d figure out a way. Careful step guying can do amazing things.  However, in this case I chose to make a custom lift arm for my Kubota bucket.  It’s heavy angle iron with an articulating section to allow for the mast to remain upright as the bucket swings up. 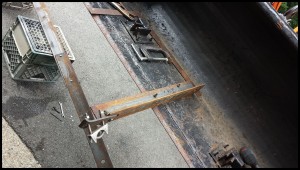 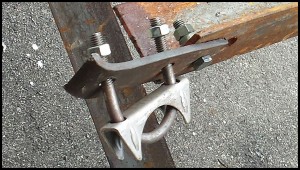 Here is the lift are in place.  Works great! 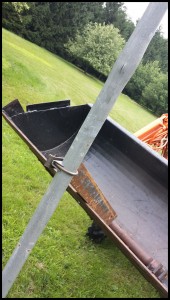 And here it is during the lift 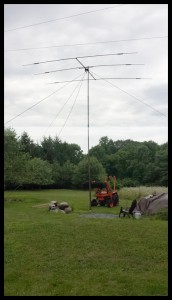 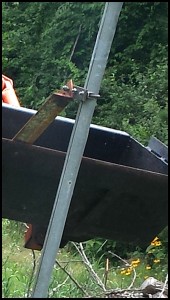 This was a bit more exciting than I had hoped for….  The trick is to let out the guy lines a bit at a time and lift it snug.  I let out just a bit too much and as soon as the bottom was off the ground the 30 foot and about 80 pound antenna and mast began to tip over.  The cure?  Fast lift on the bucket until it snugs against the guy lines.  This was as close as I came to a crash.  I was still at a pretty high angle, it might have stayed up without the quick lift…  I took no chances.

Finally, it’s up and guyed in three directions and at two levels. 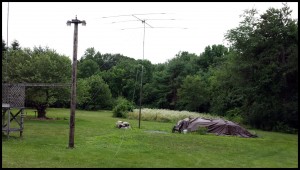 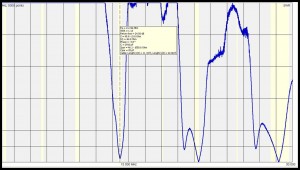 So how does it do?   I have it pointed northeast for Europe DX- many terrific contacts.