I recently bought a used Bird model 43 wattmeter.  I paid $130 for it at a ham flea in MA.  I need it for measuring the maximum output of my HF amp build.    I started looking for a 5kw slug right away- there was a vendor selling them that day but i didn’t want to spend $130 for a Coaxial Dynamics.

Over a couple of weeks I watched Ebay but didn’t find any deals.  I eventually found one on NM3E’s website- a used Bird slug for $100 bucks.  It had a known calibration error- I have researched slug calibration and figured I’d probably be able to fix it as long as the coil or diode wasn’t damaged.

The first issue was getting the slug opened.  I had read compressed air sometimes would blow the lid off- …not on mine…it was riveted.

I tried to drill out the rivets, used a very small drill bit and did my best to center it.  The rivet head is rounded and the bit wandered.  I choked up on the bit in the chuck to allow only 1/2 an inch unsupported- it still wandered.  That’s when I realized the rivet was hardened.  I would have thought aluminum or some other soft metal.  Luckily I had a small diamond drill bit from some other project- it was still tricky- but I was able to drill out both rivets.  I had almost no damage to the lid, it’s tricky for sure- the bit wants to slide off the domed head and onto the soft aluminum lid. 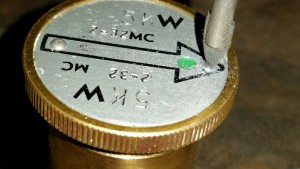 Inside I found two screws for trim pots or trim caps-  I didn’t open it that deep to see.  In plain view was a 1% resistor at 1100 ohms.  I measured it at 1700.  There was a bit of green corrosion here and there- I suspect the previous owner had or used this in a humid environment.

I didn’t have an 1100 at 1% so I paralleled some carbon film resistors until I was close- but when I tested against a good meter I was still off.  In the end I had to remove resistance until I was long and then tack solder resistors and test until I was matching the reference.

The slug now tracks the reference from about 400 watts to 2000.  Below 400 watt’s the meter reads a bit high, above 2 kw I have no reference but suspect it’s OK.  I used a bit of contact cement to put the lid back on. 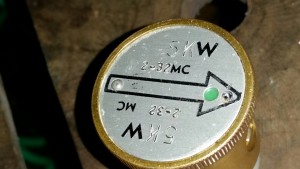 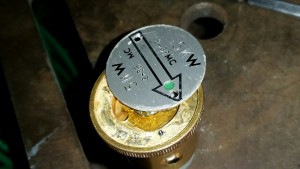 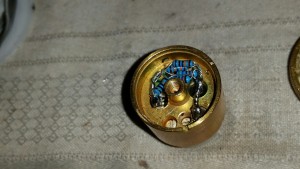 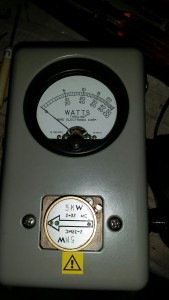